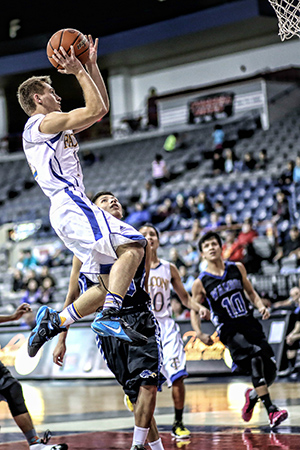 After dropping game one of the 2015 LNI tournament, the Todd County boys high school basketball team earned wins over Crazy Horse and Tiospa Zina to reach the finals of their bracket.

Down a few players to injury, Todd County dropped their final game of the tournament to Cheyenne Eagle-Butte.

After staying with Lower Brule for much of Thursday night’s late game, the turnover bug bit Todd County late as Lower Brule earned a 71-53 win over the Falcons.

After dropping their opener with Lower Brule, Todd County rebounded with an easy, 78-40 win over Crazy Horse.

John Hacker led the Falcons with 20 points but the Falcons got double-digit points from Aiden Bizardie, John Boyd and Chris Eagle Bear.

Eagle Bear continued his solid efforts on the board with 11 rebounds.

After dropping behind early Todd County fought back to claim a 75-72 win over Tiospa Zino that put the Falcons into the championship game of their bracket.

Senior Austin Hammer led the Falcons with 25 points while freshman, Aiden Bizardie pumped in a career high of 17.

After fighting their way back from a tournament opening loss with two straight wins, Todd County ran into a buzz-saw as Cheyenne Eagle Butte shut down the Falcons in an 84-64 win for the Braves.

Todd County, down several players because of injury or other, was led in scoring by Aiden Bizardie and Umpo Little Doctor who had 16 and ten points respectively.

In this event, after a visit to his loaf thinking whether I buy cialis online must to answer directly becomes clear and plain for everyone who is intricate in this at least a few years buy cialis in time can resolve problems.