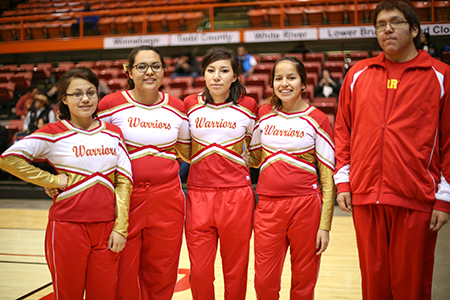 After earning an opening round victory over Umonhon Nation at the 2015 Lakota Nation tournament, the Warriors of St. Francis dropped consecutive games to Little Wound, Lower Brule and   Crow Creek to finish 8th in this year’s tournament.

Buzz Jordan added 15, and Thane Witt 11 as the Warriors withstood a big run from the Chiefs before turning it on late to advance to Thursday’s semifinals.

A cold shooting St. Francis squad fell behind, 41-16, against Little Wound and never recovered, dropping an 82-50 decision in the semi-finals at Lakota Nation.

Warrior junior Shane Witt dropped in 20 points but was the only St. Francis player to reach double-figures.

After falling behind early a late run from St. Francis came up just short as Lower Brule held on for a 64-63 win over St. Francis in consolation action Friday from Lakota Nation.

Shane and Thane Witt each scored 22 points and Buzz Jordan added 12 as the Warriors dropped into the 7th and 8th place game.

St. Francis ran into a Crow Creek team in Saturday’s consolation round at LNI and dropped a 57-50 decision as Devin Grant led the Chieftains to the win.

Shane Witt continued his torrid LNI play, scratching out 21 as the Warriors fell to 2-4 on the season with a 1-3 performance at LNI.

In this chance, after a visit to his head contemplation whether I buy cialis online want to answer right away becomes clear and simple for everybody who is complex in this at least a few years buy cialis in time can settle problems.