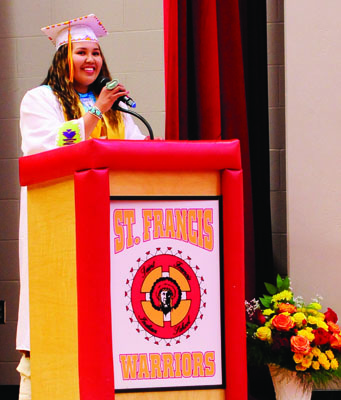 The overcast day provided a sharp contrast to the brightness of the mood inside the St. Francis Indian School gym last Sunday when 40 seniors put on caps and gowns - many with beautiful and intricate beadwork and other decorations - and received their high school diplomas. In fact, the Warrior Dome was practically filled to capacity with smiling people, colorful signs, and joyful balloons. And an occasional airhorn.

When the graduates finally entered the gym, dressed in white caps and robes with gold stoles, the audience erupted in cheers and applause. After the students took their places, the Red Leaf Drum Group performed the Lakota Flag Song and the Akicita Luta Drum Group provided the Victory Song. The Eyapaha was Duane Hollow Horn Bear and Henry Quick Bear delivered the welcoming prayer. There were several students who were not able to attend the feather tying ceremony earlier in the week, so they stood in front of the stage while one of their relatives tied the feather in their hair.

Rosebud Sioux Tribe President Rodney Bordeaux addressed the graduates and encouraged them to always take care of their health: mental, spiritual, and physical. St. Francis Indian School C.E.O. LuAnn Werdel gave a welcoming address followed by congratulatory remarks by high school Principal Debra Boyd. Both praised the students’ efforts and perseverance, and wished them success in all of their future endeavors. They also pledged to keep their speeches brief, which elicited a few chuckles from the audience, but to their credit both delivered on that promise.

Two current faculty members, Caitlin Bordeaux and Justine Ruhlin, were invited by the class to speak at their graduation. Bordeaux, who will be leaving St. Francis for another position, gave an emotional address, thanking the students for teaching her as much as she taught them. Ruhlin challenged the graduates to make the world a better place. She gave a brief chronology of historic events that have occurred since the graduating class was born. There were good things, like the election of the first black president, and bad things, such as the terrorist attacks on 9/11 just when the students were coming into the world. But she felt a strong sense of hope for the future in the hands of the Class of 2019. Ruhlin encouraged each student to work for positive change, to fight for their ideals, and to give their best effort to see that the advances of the past continue into the future. To the graduating seniors, she said it was her final history lesson for them.

The event’s guest speaker was former St Francis teacher Zachary Cohen, who the class asked to return for the day to share in their achievement. Cohen said that he struggled with the idea of delivering a speech full of profound nuggets of wisdom with which to send the students on their way out of their youth and into the world, until he realized that the lessons he learned from the students contained the wisdom he was seeking. He called out numerous members of the Class of 2019 for their own innate wisdom, their willingness to try new things and sometimes to fail, their perseverance in the face of obstacles, and their quest for new knowledge.

Next were the student speeches from class speaker Shelby Little Shield, who spoke about the inclusiveness of her classmates and how they supported each other, and valedictorian Matilda Anderson, who called on her peers to continue their successes and always strive to accomplish their goals and dreams. She also shared how much she felt welcomed when she returned to finish school at St. Francis, and reminded her friends, “Once a Warrior, always a Warrior!”

One of the remarkable elements of the celebration was when the scholarships were presented. It has already been covered in the Tribune that the St. Francis Class of 2019 is sending more students on to higher education than any previous class, but it really hit home with the sheer number of scholarships that were awarded to so many of the graduates.

The senior class slide show, featuring a score of the graduates’ childhood photos, elicited as many giggles from the youths as it did tears from their parents, grandparents, aunt and uncles. The Rose Ceremony was also an emotionally moving gesture, as each student presented a rose to someone who had been a significant influence in their lives.

Upon leaving St. Francis Indian School on Sunday, one couldn’t help but feel a tremendous sense of hope for a senior class who chose a quote from Dr. Seuss as their motto: “You have brains in your head. You have feet in your shoes. You can steer yourself any direction you choose. You’re on your own. And you know what you know. And you are the one who’ll decide where to go.”